While working with Ann Thompson on the publication of her book, Say Sorry, we made the acquaintance of Ella Birkin, another former resident of Christchurch’s Nazareth House. After seven years of institutional abuse and punishing conditions, Ella and one of her sisters executed a bold escape one moonlit evening. Their train journey through the night to Greymouth is the stuff of cinematic suspense, for once their escape was discovered the nuns were in hot pursuit. When the two innocents disembarked in cotton dresses in the frost bitten dawn, they had no idea what to do next or where to go. Having sat for much of the day deliberating before a cheery fire in the Greymouth Station waiting room, they hit upon the grand idea of buying fish and chips. Thus begins Ella’s new life of independence. Written by Ella herself in forthright style, the clever and feisty girl from Dunollie manifests singular West Coast spirit. 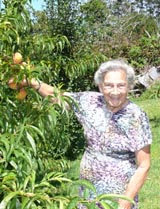 "I served up the silverbeet, what do you know, there were snails in it. And whose plate did they land on? Only my father’s. I heard the crunch. The language fired at me after that was enough to make me cry. He took all my money, seven pound, and when I left he gave me 12 shillings. From that I was to catch the bus to Greymouth where I still worked and lived. While I was outside the gate a truck headed in the same direction stopped and I got in. That was the only time I went home."
– Ella Birkin


back to project library | back | next