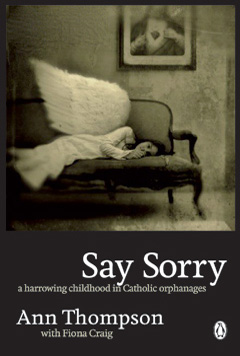 Whangarei woman, Ann Thompson speaks candidly about the abuse she suffered as a girl.

Told simply and from a child’s perspective we could see from the outset this was a powerful story.

After months of working with Ann to develop a manuscript we put it in the hands of a leading literary agent. Say Sorry emerged a minor classic in 2009 when Penguin Group (NZ) published and distributed it in New Zealand and Australia. More recently we added a subsequent chapter detailing significant developments since the book’s publication and, at Ann’s behest, we facilitated the e-book version two years later.

"One summer, when the church peaches were ripe I was told by the other girls to pinch some. I was easily pushed into doing things they were too smart, or too scared to do themselves. As we walked past the church in procession, I glanced around and then, like a flash to the peach tree I darted, filling my knickers up with beautiful peaches. I could feel my black bloomers getting heavier and heavier as the fruit wobbled around inside them.

I was sure I was done for as one peach after another fell out. But luck was on my side. I hadn't been spotted by the nuns. Then the sickening thud, thud, thud as the rest of them fell to the ground too. I was caught well and truly and that night when I was lined up to be put across the bed I at least knew why."
– Ann Thompson

back to project library | back | next