The stories we bring to light represent important markers of what it is to be a human being living at a particular time and place.

I had worked with Graham Hannah on a few occasions over the years and considered him a friend. We bumped into each other, literally, on the Russell waterfront the day of the annual Tall Ships’ Regatta. One wine lead to another and within a few weeks I was recording his story on the deck of his home in Raglan. His generously illustrated memoir was published posthumously in September 2019 and launched in the garden of his Raglan home where his remarkable story was recounted.

Graham Hannah was that rare diamond … a Waikato businessman more at home in a sarong than a suit. His gritty memoir takes root in Yorkshire, the home of his childhood. He honed his sales skills selling Bon Brushes door to door and further developed them trading currency on the black market in Istanbul as a young traveller. On touch down in Hamilton, New Zealand, Graham went on to create world class events and exhibitions, the popular Waikato Home and Garden Show amongst them. The annual International Hot Air Balloon Fiesta he orchestrated was arguably the most visual event ever seen in this country.

The entrepreneur’s unorthodox approach to just about everything was fuelled, in part, by his loathing of bureaucracy and bureaucrats. It was the latter that finally compelled him to relocate his acclaimed balloon fiesta from Hamilton’s Lake Domain to the Wairarapa. A decision he describes as the most painful of his life. 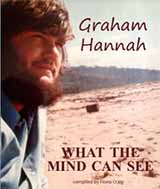 The many facets of Graham Hannah are divulged in this unconventional narrative. He was the veritable joker, smoker and midnight toker. He was a survivor. He was an aesthete and a hard-out-dreamer. He encouraged others to dream too but he would never let them stop there. Dreams and imagination were the very scaffold upon which he built his remarkable life.

This is an excellent memoir of a man most of us knew as “Mr Home Show” or “King of Home Shows”.

Graham Hannah – What the Mind Can See is an exceptional memoir skilfully compiled by writer Fiona Craig and certainly worth a spot on your bookshelf.


back to project library | next